Global financial space has witnessed a plethora of products which have tried to disrupt the financial industry, be it crypto currency or digital payments.

With almost 2 billion people globally unbanked as per World Bank estimates, Fintech is another industry which has gained prominence over the last decade.

Morgan Stanley estimates that the P2P lending market is projected to grow at a CAGR of approximately 50%, making it a platform to look out for in the coming years. 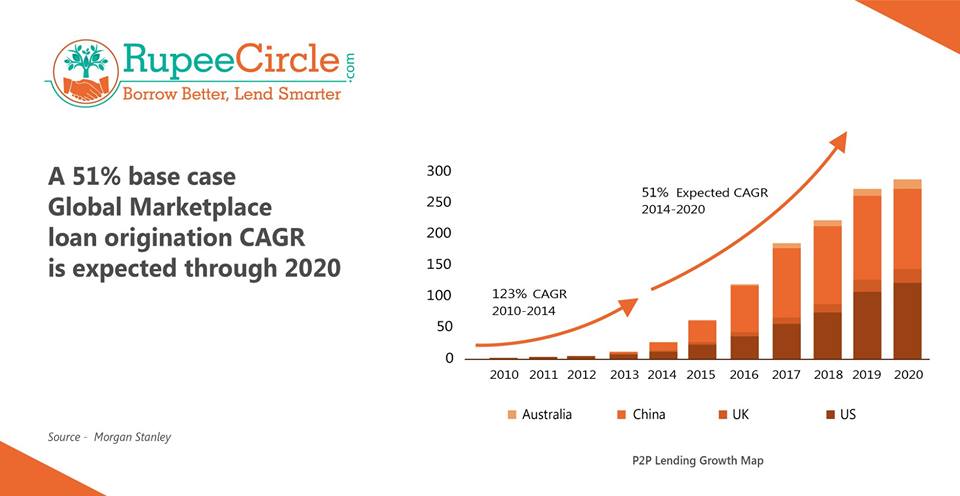 With its inception in 2005 in United Kingdom, P2P platforms were officially launched to match borrowers and lenders. Since then, multiple P2P platforms have emerged across the world as an alternative to get loans. The global market size of P2P is expected to reach $460,312 million by 2025.

Currently, P2P has managed to make its presence felt across five continents- Europe, North America, South America, Australia and Asia. In countries like United States of America, Canada, United Kingdom and China, P2P has already established itself whereas there are countries like India, Brazil and Indonesia, it is in nascent stages.

Mentioned below is a brief review of the P2P market across the globe:-

RupeeCircle.com is the new age P2P finance company that offers an online platform to connect borrowers with lenders looking for better returns.

← Previous Story 7 Reasons Why Indians Are Adopting To Peer-To-Peer (P2P) Investments Faster
Next Story → What Is P2P Lending And How Is It Regulated?

RupeeCircle is the new age Peer to Peer finance company that strives to “make borrowing better and lending smarter”.

Backed by Mahindra Finance and Oracle’s Cloud Accelerator Program, we aim to drive financial inclusion to millions of unbanked & under-banked creditworthy borrowers in India. We believe that with increasing internet penetration, digital footprints & big data analytics individuals can act as “Banks or Financial Institutions” themselves and thereby extend financial services to the last mile.